I’ve always been intrigued with large format film photography; the slow pace, unmatched quality/resolution and not knowing if you got the shot until weeks later when the film has been processed/scanned. Since I primarily shoot with a Nikon D850, which claims to be on the same level as medium format film, I knew I had to step it up a bit to justify going the film route vs. sticking with digital. I ultimately decided to go with a 4×5 field camera and a somewhat wide angle 90mm lens (28mm in full frame DSLR terms) to give it a try.

I’ve shot some roll film in the past on a traditional SLR, but nothing can prepare you for the steep learning curve of loading sheet film in darkness, composing a shot upside down and backwards, focusing on the ground glass, etc. There are just so many opportunities for something to go wrong.

Since I didn’t want to be rushed on my first shot and I didn’t know how the film would handle wide dynamic range scenes, I knew I wanted to avoid a sunset/sunrise. I decided to go to the South Yuba River, just outside of Nevada City, to a rock I’ve shot before because I knew the composition I wanted and what the light would do.

Using a makeshift dark cloth and loupe, I was somewhat confident I was able to get a nice composition with the entire scene in focus. I used my DSLR as a light meter to get what I thought was the proper exposure. I brought with me 2 film holders, each with 2 sheets of film. 2 sheets of Velvia 100 and 2 sheets of Delta 100 (black and white). Just in case I messed something up with loading the film, I exposed all 4 sheets of the exact same scene hoping that at least 1 color and 1 black and white would turn out. 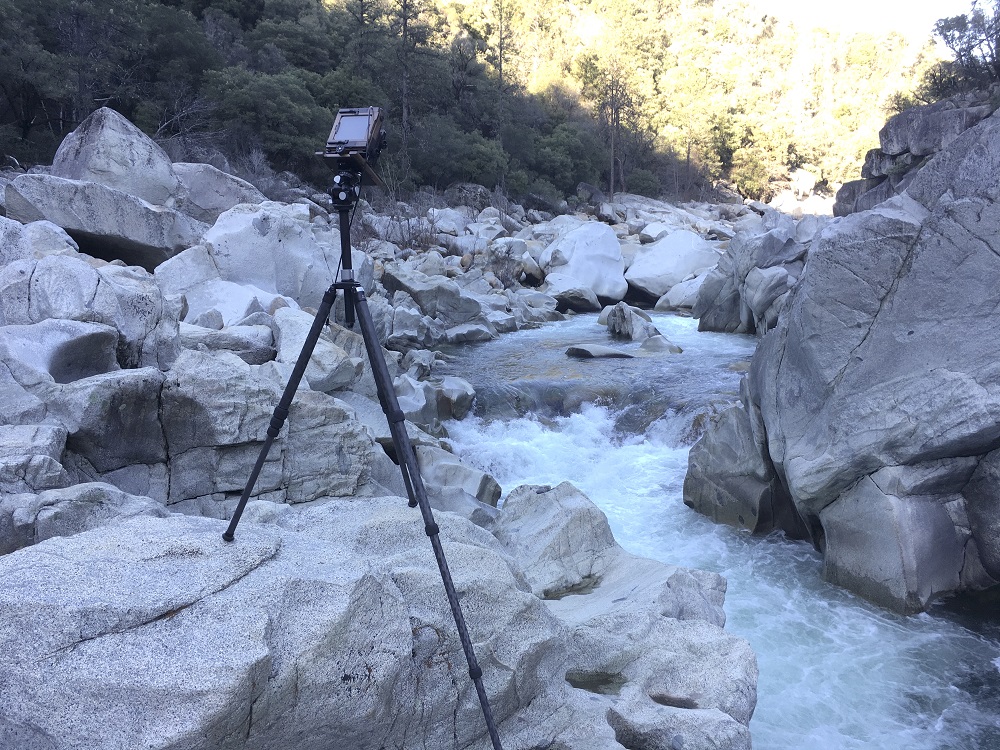 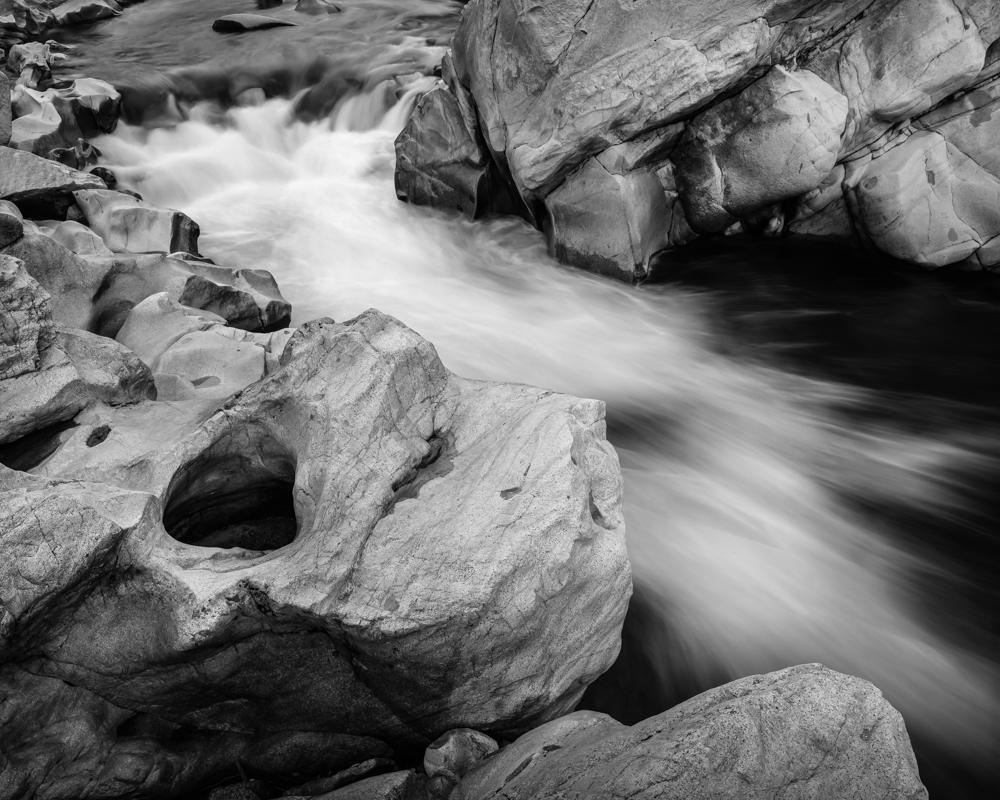 The color shots on Velvia turned out ok in terms of focus/composition/etc., but since the scene was in full shade it turned out very blue. Time to get a warming filter…

For comparison (and just in case none of the film turned out), I also shot the scene with my D850, though slightly different aspect ratio and field of view: 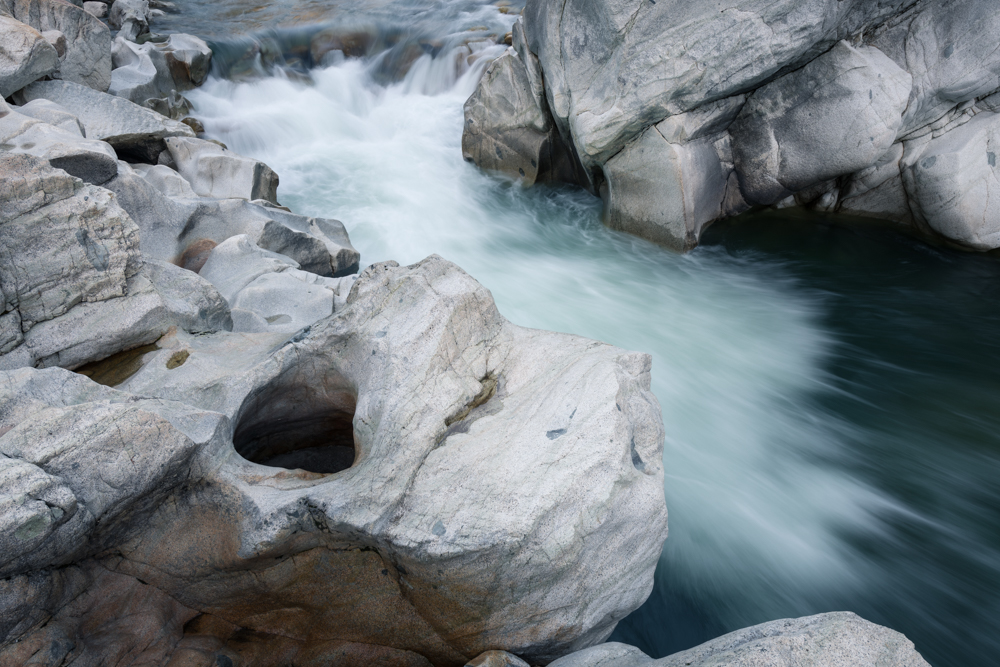 I am very confident with my DSLR and know I can typically get the shot I want. I am not at all confident with the large format film camera, but I know if I put the effort into learning more (maybe even processing my own black and white film) that the end results will be far superior to my DSLR and the experience will be much more rewarding.

Here is an example of the resolution differences of my cameras, a 12 megapixel iPhone, a 45 megapixel D850 and this 320 megapixel scan from the 4×5: 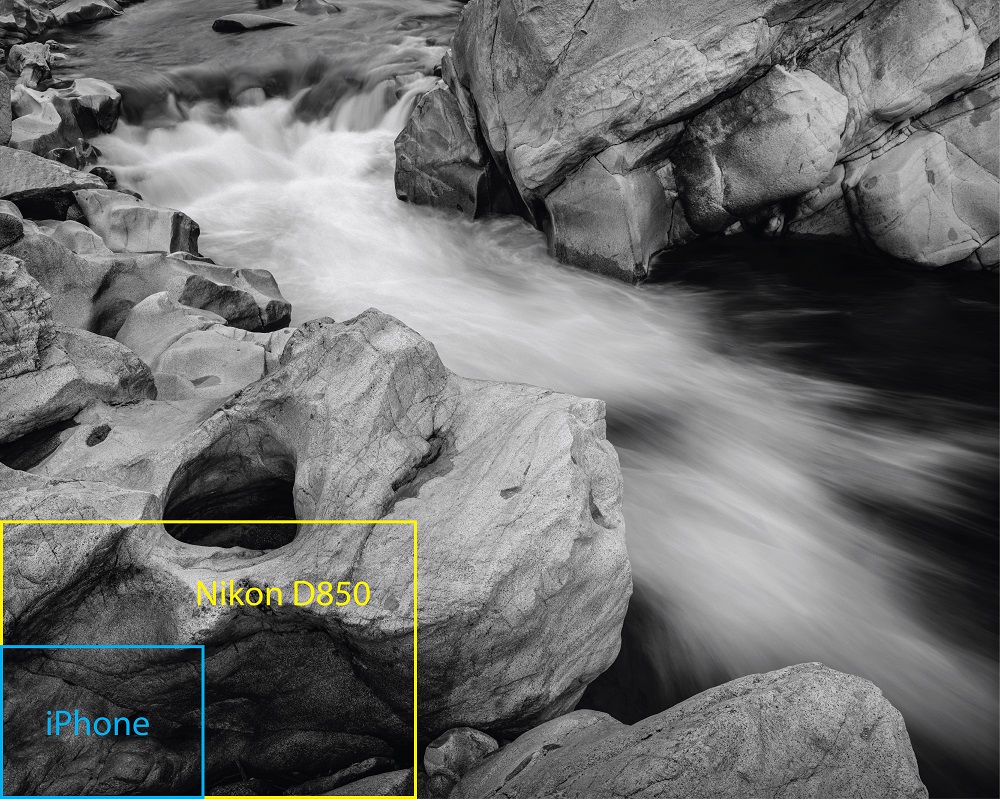